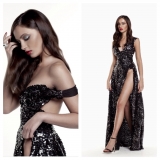 After visiting AFWL 2012, Artist Jessica Baah was inspired although slightly disheartened by the lack of representation of the broader more exciting Africa that she had grown up in. on August 2013 she showcased a line entitled Land Of Gold with inspiration from her motherland Ghana. The idea was to bring on a new Africa, the rich Africa she had grown up to know, she brought on a darker edgier side of Africa that people were perhaps too afraid to show or didn’t know they were even allowed to portray.
The opening piece that came out at the show both startled and excited the audience, images of that piece later became the forefront campaigning image for the following years AFWL and various other African inspired events.

“it was never my intention to be viewed as a designer, perhaps I should have put the pieces in a gallery so it could be hung and realised for all its intended purposes; ART, and escape the scary reality of walking the runway as a designer after my pieces were shown, what I simply wanted, was to evoke emotion excite the senses and inspire other designers to perhaps push the boundaries of the Africa people hardly acknowledge”

Since that show the brand has been featured in several noted magazines such as pride, NAW, Blackbeauty to name a few and her pieces have been worn by the likes of Joselyn dumas, Ezi Emela and CEO Dancers.

In 2016 the brand is preparing for its official launch and making its art available to the public to buy.