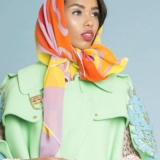 Joana Almagro is a Filipina born designer based in the UK. Her heritage the Philippines, is one of her inspiration in creating her eponymous collection in which she combines her culture, design philosophy with elements of haute couture and modern European style.

She studied BTEC Foundation in Manchester Metropolitan University and graduated with distinction. Currently, she is a recent graduate in BA Fashion Design  with honors at the same prestige university in 2016.

During her studies, she won accolades in various competitions; Winner ASOS Graduate for Clothes Show Live 2013, Finalist Shoreditch Fashion Show 2013, Finalist at the Frankfurt Style Awards 2014. She was invited to exhibit commissioned by Manchester Art Gallery in collaboration with British Fashion Council and Art Commisions for NOW 14-18 held at Manchester Art Gallery this summer 2016. She is also a finalist for Bilbao International Arts and Fashion Competition 2016, Burberry Competition 2016 finalist and selected to compete for university challenge for Sophie Hallete Lace during Graduate Fashion Week 2016.

In 2015, Joana had an opportunity to work for a luxury designer Roland Mouret in his studios at Mayfair, London.

Her debut collection was first showcased in Milan at SUPER Pitti Immagine garner spectacles for Milan Fashion Week SS17. She’s been selected again to present her SS18 collection at the same event.

Her designs made international acclaim on different periodicals and magazines such as Cosmopolitan China, The Telegraph, Chasseur, Manchester Evening News, Instyle, The Polo International, Deluxe Magazine, Ellements Magazine NY and etc. Celebrities also recognised her designs worn by the cast of a TV series Made in Chelsea  and many requests from A-list celebrities.