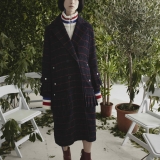 Jamie Wei Huang is a luxury womenswear label which combines conceptual ideas with modern silhouette. The label is founded by Jamie Wei Huang after graduating from Fashion Design Womenswear at Central Saint Martins Art and Design College in London. Jamie Wei Huang was launched in 2013 after winning the award of "Designer For Tomorrow" final list, her AW14 collection also won first prize for the " ELLE NEW TALENT AWARD" in Taiwan, in 2014 JAMIE WEI HUANG also selected as short list of "Vogue Italy International Scout Award". During her studies, she has worked in high-end fashion houses such as Alexander McQueen and Christopher Kane and she was also one of the costume designers and tailors for the 2012 London Olympic and Paralympics’s closing ceremony.
Jamie has also been active in the arts industry. In 2009, she was selected as artistic representative for the Societe Nationale Des Beaux at Louve, won Medaille de Bronze at Le Salon 2012 Societe Des Artistes Francais and was the finalist of the Taiwan National Large-sized oil Paintings Competition. Her background became her foundation in developing contemporary fashion and concept building, appearing in her signature elements in design details and silhouette.
The label is based on the principle of bringing out the character in contemporary women. The ideas of fashion is the language of exploration of the inner self by materials and silhouette, developing the concept of garments but refined in cutting and details. The essential components of the label are simplistic with a clean refined outline, incorporating masculinity into the details.
The label Jamie Wei Huang was created to enforce the idea of present day women by developing new ideas with materials and cutting, exploring the modern woman and representing these characteristics through this language.