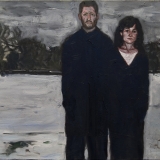 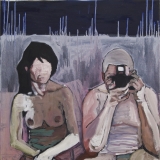 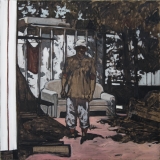 'In my paintings I am both the subject and the object. In a narcissistic act I, the artist, deconstruct and recreate figures of myself and of my loved ones. I take images of my banal life, build them into stories and present them as important. The way those situations are painted transforms an everyday images into broken narratives, into unclear statements. This lack of clarity, this doubt, is the ambiguous point I find most fascinating in the human condition, and it is only from this personal point that I can try to say something real.'

April - May 2013: Self, Self Portrait Exhibition at the Royal Society of Portrait Painters Annual Exhibition, Mall Galleries, London.

April 2013: Memory and Desire part I, The Violet Hour, London.

March 2013: An Undelivered Postcard from the Edge of the World: Jotta Emerging Artists exhibition at the Affordable Art Fair in Battersea, London.