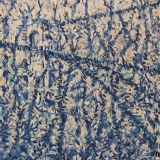 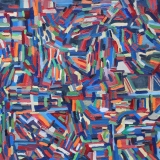 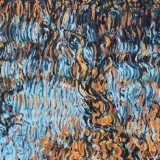 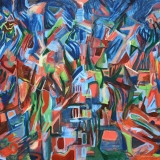 I am an artist and engineer from Scotland currently living and working in London. After studying an engineering degree my need for balance and self-expression led me to undertake a more informal fine art education; studying an art and design foundation diploma and at various night classes around the UK. During this time I have developed as an artist greatly influenced by art of the past, but also by many influences outside the visual arts: from literature, music, philosophy, architecture, science and the natural world.

Perennial themes I use art to explore include the illusion of permanence; the struggle of opposites; the place of the irrational in a society favouring the rational. I see the inevitable process of disintegration and reformation occurring through the struggle of opposites. Painting for me is a way of representing this: paint becomes simultaneously distinct and nebulous, rationalized and ordered as much as it can become chaotic and disordered.

I often use the contrast between regular, geometric forms and sinuous ones as a point of departure. Increasingly, my paintings aim to be somewhere between the representational and the abstract, never becoming entirely one or the other as a way of opening up possible interpretations. For me, created images have the potential to give meaning to the flux of it all, even if only fleetingly. My work is a mixture of drawing, painting and sculpture.

Still a practicing structural engineer, I particularly enjoy the dichotomy between disciplines, using one to counterpoint the other. I currently work from a studio space in North London and have exhibited work in Edinburgh, Newcastle and London.