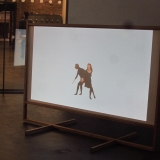 Harriet Stripling is a practicing artist and studied at Chelsea College of Art and Manchester Metropolitan University. She received her MRes in Art Theory and Philosophy from Central Saint Martins in 2014.

My practice explores repetition, regression, seriality, déjà vu, the belated and the premature, the disjointed and the out of synch, all of which go against sequential notions of time and chronological experience.

In ‘Unavailable encounter’ two different temporalities collide to facilitate an unavailable encounter between disconnected times, in which before’s and after’s interact freely with each other. The time represented in this video ceaselessly mutates but does not progress to go anywhere; it’s open-ended and multiple, not orientated towards a final point but folded into itself so that beginnings and endings are indistinguishable. The dancer not only dances through space but also through times, throwing herself out from the historical confines to join herself in a virtual time.