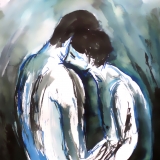 Hafiiz Karim presents the world of his hopes, fears, success and failures that contains the both awful and wonderful. His art is deeply confessional, utilizing the purity of human emotions as sources of creative expressions. To him, art and life are indivisible, as his memories sustain his own art.

Text takes on an important role in the creative work of Hafiiz Karim. Hafiiz attempts to blur the lines between literature and visual art by featuring writing as a part of his work. Be it of line or of word, Hafiiz still uses Art as a message. In his watercolour illustration series, Hafiiz presents his ambiguous figurative works in a vulnerable and sincere way, so as to find strength and motivation to carry on. He hopes that his art is able to establish an intimate connection with the viewers; To remind them of their vulnerabilities, for it is the true essence of strength in everyone. Hafiiz Karim works mainly with watercolour, drawings and monotypes but constantly experiments with other mediums to explore the universal theme of emotions.