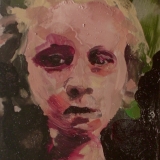 Geraldine Swayne is a London-based artist and filmmaker.
She studied Fine Art at Newcastle University, graduating in 1989. She she won a Northern Arts Travel award in 1990 to paint and make super-8 films about Voodoo in New Orleans and later in 1991 moved to Languedoc in France. Between 1991 to 2005 she became a pioneer special effects designer, working at Computer Film Company in London and Los Angeles. In 1999, she also made the world’s first super-8 to Imax film East End, narrated by Miriam Margolyes, with music by Nick Cave, which has been screened at festivals worldwide. After leaving the film industry she worked for Jake and Dinos Chapman rebuilding 'Hell'.
Although better known as a painter in 2005 she became a member of seminal krautrock group Faust,[2] touring and performing with them throughout Europe and the USA. More recently she performed live painting and drawing shows with FAUST at the Wrexner Centre for the Arts in Ohio and the Detroit Museum of Contemporary Art, and CalArts.

B1, London - October 2013
- "The Future Can Wait" with Saachi Gallery and Channel 4 New Sensations.

NO:ID GALLERY, WHITECHAPEL, London - August 2009
- 'Squeeze-Box', solo show of new paintings and drawings.
WREXNER CENTRE, USA - October 2009
- Live music and painting performance as part of experimental group 'Faust'. The paintings were made on stage as part of the performance.

BROWN GALLERY, Hoxton Square, London - Febuary 2010
- "Gabriel Hartley, Rannva Kunoy and Luke Rudolf invited one artist each who has then invited another, and so on, to a total of 36"