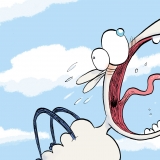 Gary Northfield has been writing and drawing comics since 2002. He has regularly worked for esteemed magazines such as The Beano, The Phoenix, National Geographic Kids and The Dandy. He has also had many books published, including The Terrible Tales of The Teenytinysaurs (Walker 2013), Gary’s Garden (David Fickling 2014), Julius Zebra: Rumble With The Romans (Walker 2015) and Julius Zebra: Bundle With The Britons (Walker 2016). A third instalment of the Julius Zebra series, Entangled With The Egyptians is due October 2017.