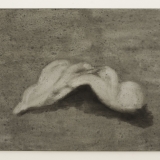 Flora Malpas is an artist and art tutor.

She previously also completed a Diploma in Portraiture at the Heatherley School of Fine Art (2017) where she was awarded the Lee and Thompson LLP Prize for Portraiture and holds an undergraduate degree with 1st class honours in History of Art from Goldsmiths, University of London.

Flora has exhibited across the UK, with venues including 2 Brydges (2018), the Institute of Mental Health in Nottingham (2016) and City Gallery Peterborough (2016).
​
Malpas also teaches art on a one-to-one basis and runs drop in community art workshops.