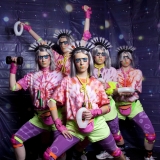 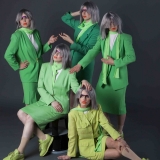 Figs in Wigs by Rosie Collins 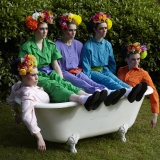 Figs in Wigs are a UK based performance company making work that is an unconventional mix of theatre, live art, comedy and dance. We have been making work collaboratively since 2012 using puns, bad jokes and pop culture references to charm and disarm audiences of all ages.

Our practice is multidisciplinary and deliberately defies categorisation. We create videos, music and objects, but primarily it takes the form of live performance. We enjoy making work at the juncture of different fields to allow our fingers access to as many pies as possible. Drawing on theatrical traditions including farce, the fourth wall and bad acting we like to make absurdist meta works that are aware of their own theatricality and are critically concerned with the creative forms they use. We like theatre that eats itself in the act of doing.

Within our shows we enjoying playing with group politics creating fictional dynamics through which we explore individualism, power structures, feminism, and competition to name but a few. Our work is highly visual and unashamedly revels in tackiness and trashiness. We are interested in interrogating high and lowbrow forms of entertainment by smashing them together and questioning the ways we attribute value to different cultural products.

29th July - Figs in Wigs at National Theatre, The River Stage (as part of The Glory Takeover!)