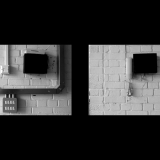 Erifili’s practice is emphasizing the Process and is strongly related to the element of Space. Collaboration and its attached concepts (identification, duality, mirroring etc) are also at the core of her inquiry. The dialogue between her and other artists informs her research and defines the outcome of her artwork.

She is interested in human consciousness and perception. She investigates this area by focusing on oppositional pairs: Inside/ Outside, Freedom/ Incarceration, Familiar/ Uncanny, Introversion/Extroversion etc. She focuses on their in between border whilst questioning its existence. The existence or absence of borders/limits/boundaries is central to her work.

Erifili is a mixed medium artist that has gradually focused on making videos. She is currently working with actors and performers on her own scripts and improvising. She often employs humor to communicate her ideas.

Her creative process is a combination of intellect and intuition. In between projects she is creating pieces that seem unconnected. Space together with her interaction with the people involved in a project, bring her research together and direct her final solution.