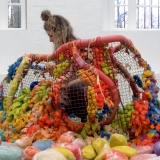 Emily Motto b.1992 is an artist based in South East London. She received a BFA in Fine Art from The Ruskin, Oxford University, and has been exhibited in group shows such as the Bloomberg New Contemporaries 2014 and Saatchi New Sensations in London, in the Gallery North in Newcastle, and at the Liverpool Biennial. She worked on an artist residency in Beijing, China, awarded by the Red Mansion Foundation.

She makes playful sculptures that perform and evolve throughout, and beyond, her creation – especially in terms of their shape, and the physicality of the unstable materials that she builds them from. She is passionate about making forms that behave and engage like figures; sensual, tactile, fragile, unstable and transient.

Making drawings also forms a large part of her practice.

Currently at Platform, Southwark
and visiting artist for AIC at Turner Contemporary, Margate 2016-17

Work has been featured in ASH magazine,
The Oculus Journal, HERO,
and on Rankin’s Hunger TV blog.

Designs are currently on sale on products in the Ashmolean Museum in Oxford, and Waddesdon Manor.