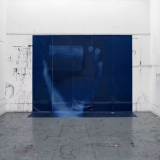 Ella is an artist working with sculpture and performance, born in South-East London 1992. After completing a foundation at Camberwell College of Art in 2011, Ella studied Interior and Spatial Design at Chelsea College of Art graduating with a 1st Class Honours in 2014. Whilst studying, Ella completed an Erasmus exchange at the Willem De Kooning Academy, Rotterdam, as well as a two-month residency at the Cyprus College of Art. Her site-specific work continued and in 2015 she enrolled on Interior Design at the Royal College of Art, before electing to change course to Visual Communication. Here she began to define her performative sculptural practice as well as starting a working partnership with friend, peer and filmmaker, Jessie Russell Donn, which continues today.