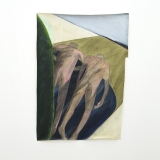 (b.1992 London) I graduated from Painting and Printmaking, Glasgow School of Art in 2015, and now live and work in London. My practice is based in painting and drawing, but I also work with sculpture and performance.

Bartholomew's Waltz
July 2016, The Glue Factory, Glasgow
August 2016, Gayfield Gallery, Edinburgh
Exhibitions and events the collaborative work of BART WALTZ collective. BART WALTZ orchestrate a recurring celebratory theatrical event that examines the need for communal enjoyment and shared celebration within our society.
As part of this program I co ran two screen printing workshops, one for adults with learning difficulties from the charity Quarriers at The Glue factory and another that was open to the general public at Gayfield Creative Venues.

I HELD MY TONUGE BEFORE THE STREAM
February 2015, as part of Boost at Platform
A collaborative work with Josephine Sweeney
Performed by a cast of 16 in the community swimming pool at Platform, Easterhouse, Glasgow

Come and Make Eyes at Me, January 2015-The Tontine, Glasgow, Solo Show