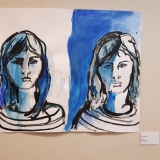 · MA in Fine Art with Learning and Teaching in Higher Education

· BA Hons. in Art and Design (specialising in painting and textiles)

April 2014 Center for Useless Splendor, Kingston In a Another World