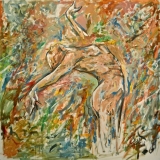 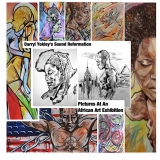 Pictures At An African Art Exhibition 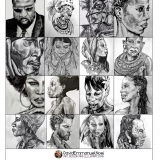 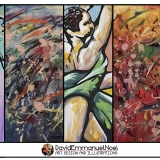 David Emmanuel Noel is a British born artist, designer and illustrator based in London and New York. He has exhibited widely in solo and group shows in the United Kingdom, mainland Europe and the United States. A Fellow of The Royal Society for the Encouragement of Arts, his passion for art began at a young age. As a child he was surrounded by art and music, sharpening his awareness of self -expression and exposure to the creative industries.

At college, he received his first commission from a local hospital to paint a series of pieces named after areas of England’s Lake District. This set his foundation as an artist. Throughout his early years he focused primarily on landscapes, from Turner inspired pieces to work heavily influenced by his exposure to the Windward Islands of the Caribbean. After joining a number of art groups and collectives, including a short period as Director and Chair of The Brixton Artists Collective (BAC), his experimentation with colour furthered, painting primarily with acrylics, producing figurative and abstract pieces covering a variety of themes.

Much of his work embodies his personal encounters as well as the exposure to history, cultures and experiences of peoples from the African diaspora. Moreover, his work is also influenced by politics, societal trends and his love of music particularly Jazz. David is interested in some form of cultural representation, yet equally attracted to the subjective aspect of painting — in the application of paint and the balance of colour, scale, line and movement. He brings a subtle and sophisticated feel to his paintings through a unique balance of colour, composition and texture.

He maintains his broader interests in the arts through involvement in a number of projects, merging the visual and performing arts with education, community development and social regeneration.

He has worked with charities and organisations such as the ACLT, NSPCC, UK health service agencies, the London Boroughs of Ealing and Lambeth, The New York Mayor’s Office and CAMBA- a New York based agency supporting social services for over 30,000 people in the city’s five boroughs. The energy for his collaboration comes from a constant desire to reveal the value of the creative industries and how each discipline provides a therapeutic component and social benefit to society.

Currently working on a new portfolio of work. Exhibitions include:

Pictures at an African Exhibition-
The Kennedy Center, Washington DC, January 2019
Featured concert and one day installation of visual arts on the Millennium Stage
with Darryl Yokley & the Sound Reformation

The Philadelphia Museum of Art-  Philadelphia, November 2018
Featured concert and one day installation of
art from the album/CD 'Pictures at an African Exhibition'
with Composer Darryl Yokley & the Sound Reformation