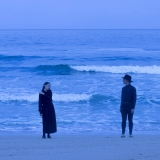 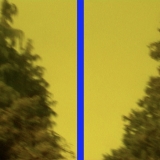 Daniel & Clara, two humans one artist on a journey exploring dimensions real and imagined, the results of which consist of moving image, photography and performance.

In their current work they have been exploring the British landscape as a site for encounters with the mysterious, the eerie, the otherworldly and the unknown. As they say, “we seek to see with one eye open and one eye closed, sight turned simultaneously out towards the world and inward to the depths of the human experience.” In their work, images and sounds of the landscape become activators of narratives where past, present and the imagination intermingle.

In 2019 they launched Moving Image Artists (MIA), an organisation dedicated to supporting and cultivating contemporary moving image art and experimental film. This includes an online magazine, screenings and the Moving Image Salon, a monthly gathering for artists to meet, share and discuss their work. The Moving Image Salon takes place at Film and Video Umbrella, London.

Several of their films are distributed online by Tao Films and Kinoscope. Films by Daniel & Clara are also included in the BFI National Archive.