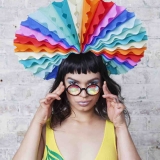 Ciara graduated from Middlesex University with a First Class BA(Hons) Fashion Degree in 2013, she has been running her own fashion brand since, and has specialised in headpieces since 2016 when her brand became launched as a Prince's Trust supported business.

Ciara trades online and at most large UK festivals every year (such as Wilderness, Secret Garden Party and Bestival) and regularly collaborates with performers from Sink The Pink to create custom headpieces for stage-wear.

Ciara also freelances as a seamstress and is a resident Face Painter & Glitter Artist for two major London club events.