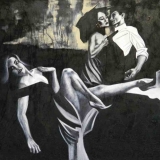 I have an experimental approach to materials in an on-going making and unmaking process that plays an important role within my work. Recently my practice has expanded to include textiles and craft based processes, such as machine knitting, to push my ideas. Craftsmanship and the making of objects are important to me, but my practice jumps from one place to another with, at times, with no obvious logic, even though there is a method to my way of working. This method can be summed up as a meticulous, process-driven unruliness.
Craft informs my practice, where together with analytical thinking it plays an important role in allowing me to step back and have a mental discussion with my work. The craftsman’s methodology has been a long-standing and consistent resource for me, but recently it has become more apparent through my use of textiles and, in particular, machine knitting. Other long standing and important influences arise from my interest in punk, heavy metal and industrial metal / electronic music and the subcultures associated with them. I am interested in their use of subversive iconography and their general anti-establishment ethos and I have incorporated these elements into my work.
Materiality, sub cultures, and experimental methodology come together in my practice to produce brightly coloured, visually abrasive, intense textile-based objects that have as much to do with craft as with painting. I come to craft as a painter due to my art training and personal history. Using canvas I integrate textiles with stitching or by wrapping the stretcher. The aims are to critique and, in turn, satirise the art / craft debate and to subvert contemporary society and culture as well as open a space for dialogue within them.
I believe that craft is as intrinsic to art as art is to craft. We cannot have one without the other. Craft is what helps us to materially shape and bind ideas in the process of making. I combine craft with a non- conformist or playful attitude and an open mind towards experimentation. I am willing to break the rules of artistic methodology and craft thinking so as to develop my practice and to become more skilled and visually abrasive. I have the attitude of punk regarding ways of working, experimentation, thinking, and aesthetics. All these elements work towards producing different, confrontational, dangerous, intelligent, and playful work.

2011 Participated in and Joint Curating of Mystical Realms Joint Exhibition.