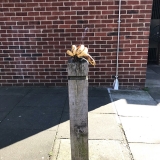 I am an artist living and working in London. I completed my BA at central saint martins.

Currently my work engages with ideas of reproduction, I have been reproducing images of my own work and ‘adding’ to them. With the image of the bear pillow I reproduced an image of a painting I had made of a bear and then rendered it sculptural and installed it on a spike coming out of the wall - making the work not facing the viewer like a painting would traditionally, instead resembling more a traffic sign or car-wing mirror.

I also have been concerned with my class and family in recent work, using material found around me and reproducing images of things I have seen in the world; such as traffic signs or flatten drink cans as well as reproductions offamily members. I recently made a cast of my dads head which I cast in jelly and placed outside on the floor for an exhibition so it gradually dissolved and melted as the day progressed. I often make a series which I see as one piece of work concerning one specific idea. My dads jellied head sat along a video work which resembled the point of view of a child being carried as well as some nieve flags with the word Conditions written on them, the same name of my studio building. All these works concerned home making as a place of production.