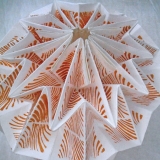 Cabinet of Curiosity Studio work between the visual arts, and traditional disciplines of architectural and textile crafts to develop narrative-led temporary exhibits and installations. Collaborations have investigated hidden histories, stories, architecture, places and crafts, with the aim of engaging audiences in design and visual art. Projects have been exhibited across the UK and internationally in a variety of settings that include museums, theatres, libraries, heritage sites, outdoor festivals, arts venues and public spaces.