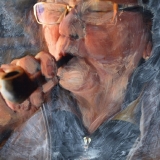 I'm a London-based artist, originally from Finland. I create illustrations by painting and drawing on my photographs.
My work is about memory and the relationship between time and memories. By painting on my photographs I want to highlight the way time changes our perception of the past. Fear of death has also got a strong presence. Life as we know it is as thin as ice - the beauty of life is tightly linked to the fragility of our existence and the disappearing nature of things.

May 2009 An exhibition of works of Art, Trinity Buoy Wharf, London

June 2008 Your Space of Mine?, The Nolias Gallery, London