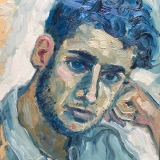 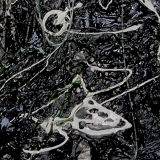 I am a London born artist making figurative expressionist paintings from life. Using a variety of mark making techniques and rapid brush strokes - my aim is to express the movement and lyrical quality of my subjects.

My fascination in capturing movement stems from the belief that everything we encounter  around us  has a vibrational energy,  and has  therefore always been the driving force behind my work. In this respect I began the first 10 years of my career making short stop-frame animation films, before venturing to Mexico to develop my work  as a painter between 2005-11.  In Mexico I settled in Oaxaca and began selling my paintings in the street,  which resulted in an offer of a solo exhibition called “Momentos Musicales” at the “Museo del Palacio” in Oaxaca City.

Since returning to London  I've  shown in several group and solo exhibitions, shortlisted twice for the National Open Art competition (2014 and 2016) and recently exhibited with the London Group at the Cello Factory for  The 83rd London Group Open,  November 2017. I have also just been awarded an NEAC Drawing Scholarship 2018-19.
I am Inspired by artists such as Auerbach, Pollock, Kossoff, Toulouse L’Autrec, Goya.

My current work explores similar techniques used by the abstract expressionist Jackson Pollock, employing them figuratively, with a view to bringing disused technology back to life as works of art in themselves.