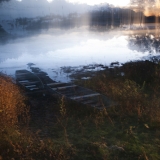 Barry Salzman, born in Zimbabwe, is a London-based artist, working in video, photography and mixed media.  He began photographing thirty-five years ago in South Africa’s shantytowns to try to make sense of the racial inequities that surrounded him.  His work continues to explore the challenging social, political and economic issues that surround us. Building on his recent photo/video installation, ​"It Never Rained on Rhodes,"​ which explores the universality of loss through the lens of one community that was decimated at the hands of the Nazis, Salzman's current project, “Traces,” explores the ethics of bearing witness and the relationship between landscape, memory and genocide. In this ongoing body of work he trains his lens on the sites of genocide from World War Two to the present day.

"Traces" is not a literal documentation of historical fact, but instead an abstract representation of the landscape as witness to history, and reminder that history does in fact continue to repeat itself in real and horrific ways. By collecting soil samples at each of the locations and working them into the photographic paper, together with paint, this mixed media work converges both the literal and representational traces of the past to create unique images that incorporate remnants of the past to offer the viewer a warning about the future.

In 2014 Salzman graduated from The School of Visual Arts in New York City with an MFA in Photography, Video and Related Media.

Writing
"Sharing Makes the Picture: The Ubiquity of Image Sharing in Social Media Networks," Vision Anew: The Lens and Screen Arts, Edited by Adam Bell and Charles Traub, University of California Press, 2015
"A Look Inside Banksy's Dismaland With Artist Barry Salzman," designboom.com, September 2015.
“All The Best, Alice,” 2013 and 2014