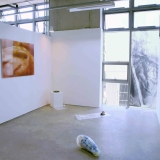 Bethany Marett is a Lancastrian artist based in London, UK. She holds a bachelor’s degree from the University of York in History of Art and her MA in Print from the Royal College of Art, London. Her work is held in both private and public collections, including Scarborough Art Gallery, The University of Calgary, the Royal College of Art, and she has two pieces within the Victoria & Albert Museum collection. She has exhibited extensively both in the UK and abroad, including at the Royal Academy of Arts, The Wellcome Collection and Flowers Gallery, London. Marett is part of two printmaking collectives - Greenwich Printmakers and the Printmakers Council, with whom she shows regularly. She is a recipient of the Almacantar Royal Albert Wharf Studio Award, David Villers Award and Company of Merchant Taylors of York Award, and in 2017 was selected for a 6 week international residency culminating in a solo exhibition, ‘material corporeal’, at the University of Calgary, AB, Canada.

Her work concerns the corporeal - the body - and all the contrasting and conflicting aspects inherent; how bodies are sensual, beautiful, ugly, damaged, idealised, sexual, abject, gendered, delicate. As an experimental and interdisciplinary artist, she operates in a variety of mediums, primarily sculpture and printmaking. Distorting and reconfiguring her own body, she works in the liminal state between abstract and figurative, in a way that is simultaneously sensual and disturbingly uncanny. Her work challenges objectification, the notion of the abject, and of the feeling of disgust, in particular of why this is a term that overwhelmingly applies to women’s bodies.