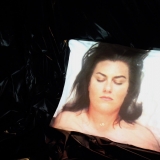 Angela graduated from Duncan of Jordanstone with a first-class honours in Fine Art. Her interest in expressing the ephemeral nature of the human condition, has driven her practice for nearly a decade. The exploration of the human condition and her personal experiences have proven natural bed fellows, forming the bedrock of her practice. Widowed young, her compulsion is to create work that explores human frailty and the resultant cycle of loss. Angela’s practice is equally concerned with the current world wide mental health endemic, that is often associated with unresolved grief and the impact of contemporary living on the emotional state. Work is created with the intention of engaging the viewer at a direct and intense level with the objective of raising awareness and dialogue. She passionately believes that pieces created with this aspiration, can provide an empathetic discourse between artist and viewer and as such has the potential to provide a catalyst for critical reflection. Whilst the work resonates from her own understanding, she explores her concepts in the philosophies of the existentialist philosophers. Her research driven practice examines other fields out with philosophy, drawing on current academic debate in psychology, sociology and anthropology, with relevant contextualising in terms of current and historic art genres. In terms of placement, Angela views herself as a socially-engaged practitioner, creating work for and with the intention of stimulating dialogue with the general public. Whilst she has achieved credible success in exhibiting in gallery environments both nationally and internationally, she aspires to connect with audiences out with this social context. Angela's creative vocabulary encompasses many mediums, enabling a liberated expressive response and the artist continues to leave her practice open to experimentation. To date pieces have included video, installation, performance, sound and found objects. The universal sentiment and concerns of her pieces have received recognition through numerous International exhibitions.

Generator. Cubed Exhibition. Dundee, Scotland . March 2015. Several pieces including the video triptych Being present and other sculptural and installation work.