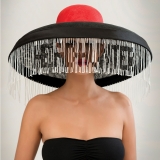 Awon Golding is an award-winning London-based milliner who has spent an eclectic youth in India, Hong Kong and England. She draws on her multicultural heritage to inspire dynamic headpieces. Working with bold shapes to create dramatic silhouettes, each piece is handcrafted in her London studio incorporating traditional materials and modern techniques.

Working as a fashion writer and magazine editor in Hong Kong, she eventually decamped to London to pursue her dream of millinery. After an apprenticeship with renowned London milliner Edwina Ibbotson, she went on to receive a Distinction in Millinery from the Kensington and Chelsea College. A job designing hats and soft accessories for high street giants Topshop and River Island followed, after which Awon decided to set up her own label.

Her flair and creative talent were recognised by The Honourable Feltmaker’s Guild, who awarded her first prize at its annual millinery competition in 2010, and she recently won the Industry Prize at the Hat Designer of the Year competition 2013 for her collection inspired by the Queen of Bhutan. This year Awon was selected by Stephen Jones and the British Fashion Council to showcase as part of Headonism, a platform for the UK’s finest up-and-coming millinery talent at London Fashion Week. Catch her AW15 collection at London Fashion Week as part of Headonism this February 2015.