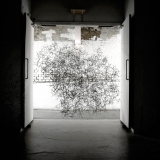 My practice revolves around single material growth systems using simple logic to build objects that are small and begin as a single unit, in either wood or metal.

Although time-consuming and labor-intensive, the physical act of making, the craftsmanship involved, is an important aspect of the work. The structures I build retain the errors of their construction and traces of the human touch, while this may appear to be clumsy or ill thought out, they are the marks left behind, a record or an index of the decision making process in how to evolve each piece.

I build in two distinct ways, one rigid and controlled, where growth is precise and exact, led by a plan, whilst the other is more informal and improvised, where growth occurs more organically, without rigid systems to guide it. Despite the differences in the way I produce work, both follow the basic premise of repetition, or more precisely, building or making marks by means of repeating an action, duplicating similarities, over and over, until a pattern or rhythm begins to emerge.

One of the defining characteristics of my practice and the works I produce, is the process by which I make something, the decisions made during the course of building, the element of chance that can sometimes occur, or the mistakes sometimes made – which may then go onto become the works themselves, or push an existing piece in a direction not anticipated or planned.