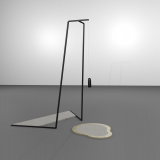 Andres Ayerbe and Camille Leproust work at the intersection of sculpture, installation and technology, drawing from a keen interest in socio-political issues and humanism. At the heart of their visual language lie everyday consumer objects and their behaviour, which are hacked and reappropriated in an attempt to subvert the manufacturers/consumers hierarchy and establish a form of ownership over the mass-produced.

NOOT.CLUB have recently been part of Unbinding the Book, a group show at the Whitechapel Gallery in London, and have been commissioned by TANK Form to create a kinetic installation for a Harrods window display; Recent press includes The Guardian, Crane.tv, It’s Nice That and Grafik.

September 2014 / Unbinding the Book exhibition at the Whitechapel Gallery, London

June 2014 / Workshops and Commission with the Thomas Fairchild school in Hoxton.

27th May 2014 / Showcase and presentation for the V&A Digital Futures programme.

April 2014 / 'A Europe for All, by All’ exhibition at the Hundred Years Gallery in London.

February 2014 / Nominated for the 2013 Internet of Things Award in the category Networked Art.

January 2014 / Shortlisted to create an Interactive Installation for TRACES 2014.

July 2013 / Best Of Show at the University of the Arts London.