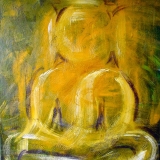 Anan Thathamma was born in Prachinburi, in the east of Thailand, in 1969. He spent 12 years of his childhood living and studying in a temple, where he studied Buddhism & Sanskrit on top of his other school subjects. During this time, he gained an appreciation for art, particularly religious art. Moving to Bangkok at the age of 18, he worked in various roles to provide himself with an art education, studying at Alliance Francaise under the tutelage of a French/American artist. Anan studied drawing, watercolours and oil painting, finally settling on oil and acrylic as his preferred medium. Over the past 15 years, Anan has held several solo and joint exhibitions at various locations throughout Bangkok, and his work has been acquired by collectors from Asia, Europe, and North America.