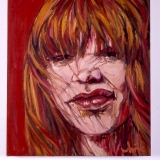 Alice White is a professional Oil Painter, working exclusively from the figure. Since graduating with a BA Hons in Fine Art Painting from Chelsea College of Art and Design, she has become well known on the South London art scene as a Curator, Presenter and Art Tutor.

Alice conducts her practice with an emphasis on building strong community links, developing the visibility and accessibility of arts within the surrounding area, and celebrating the diversity of the local population. Her work depicts characters sourced from the streets of South-East London. These portraits serve as a contemporary narrative on the life of a community as seen through its’ people. Shifts in economic mobility, changes in cultural diversity and a slew of regeneration projects all continue to play a part in the structure of our society, and these fluctuations are clearly marked in the anatomy of the local populace. In this sense, her subjects act as evidence of the area they inhabit- their facial expressions and physical gait represent the nature of their environment and it’s effect upon them. Their environment is shaped by them in turn, creating a symbiotic relationship in which subject and surroundings equally influence each other’s character.

An experienced Lecturer at Central St Martins College of Art and Design, Alice aims towards building artistic confidence in the local community through the local Life Drawing classes she has run for over 2 years. Her diversity as an art tutor is clearly represented in her role as Lecturer for the ground-breaking new courses at Central St Martins Online School, which are broadcast worldwide.

“If Santa squeezes one of Alice White’s awesome oil paintings into my stocking, I’d be a happy girl” Lauren Lavern, Grazia Magazine(Jan 2010).