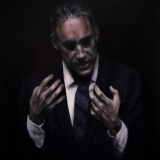 Born in 1987, Transylvania, I showed proclivity towards drawing from a young age, copying Rembrandt sketches from a book my grandmother bought me from an antiquarium. At that time painting didn’t interest me, it seemed too messy and permanent. I don’t mind the mess anymore, I make plenty of it in my South London studio and the permanence of my work is what drives me to improve my painting skills, so my grandmother would be proud of me.

2016, May - “Perceptions of the figurative” Group exhibition, 5th Base gallery, London, UK