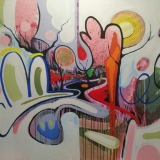 Adrian Eaves was born in Cambridgeshire in 1975, but he spent his formative years in Nottingham, before a move to Loughborough where he graduated from Loughborough College of Art & Design with a BA (Hons) in Fine Art Painting and then furthered his post graduate qualifications by gaining the equivalent of five degrees. However, if asked what he does, Adrian's first response is to describe himself as a Painter, but he also puts his education and work experience to good use and he is currently the General Manager of Autograph's galleries in Shoreditch. Adrian now resides in a renovated old factory in Hackney, London, and continues to paint with a passion from his studio.

His abstract works are often multi layered, textural, thick with paint.​ Each mark made is different from the last, and the marks made before it partially remain to illuminate the journey. As a result, Adrian can be seen to paint in the moment - the present, but he respects the past and the results are paintings that are full of energy, depict the transcendence of time and bring to light images of memories once had.

His portraits and landscapes are mostly representational but are becoming more abstract over time. The influence of a small village called Capileira, resting in a gorge in the highest mountain range in mainland Spain, is a returning theme and inspiration to him for his landscapes. Adrian's pots, vases and sculptures are mostly made from a material called yeso (a plaster), which can be found in one of the small white villages nearby. The furniture he makes is mostly recycled and upcycled with the addition of materials found locally. This is also true of his painted clothing, that is often on recycled waistcoats and jackets.​

His works have sold internationally and can be seen on permanent display in Capileira and London.

Garage Cosmos, Avenue des Sept Bonniers 43, 1180, Brussels, Belgium - Duo Exhibition - Date to be set dependent on when Coronavirus is no longer an issue