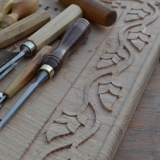 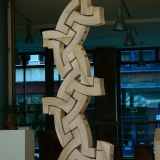 Adam Williamson is an award-winning calligrapher and sculptor, he undertaken a long list of prestigious commissions and exhibited internationally.

Adam mostly works to commission, he is a skilled calligrapher, geometer and wood carver. He is interested in particular shapes and patterns that can tessellate into perfectly balanced structures. His work tries to embrace universal principals of nature and the hands-on application champion’s high craftsmanship and minimal design.

Adam has been commissioned by:- HRH the Prince of Wales, Oxford University, Shakespeare’s Globe London, Kew Gardens, Westminster Abbey and the British council.

He has also undertaken a series of permanent public art works around the UK, including a series if sculptures for Sustrans cycle routes in Wales. He is currently working on sculpture projects for the Queen Elizabeth Olympic Park.

Adam has been a sessional lecturer at Birkbeck, University of London and has given workshops and public lectures at many of the leading cultural institutions in the UK and beyond, including:-

Adam comes from a family of craftsmen and artists, he has travelled the globe to work with artists from diverse backgrounds in places such as Mount Athos in Greece, Spain, Morocco and Turkey. He was the subject of a documentary when he travelled to Malaysia and Indonesia looking at the woodcarving in that area.

Since 2010 Adam has regularly visited Jamaica working as a consultant for an on going PSTA project, which is supporting a group of woodcarvers. In 2013 he also undertook consultancy work in China and Azerbaijan which focused on preserving traditional craft skills in those areas. He is currently involved in an annual outreach program in Canada.

In Search of the Dot that Created the Circle: Geometry in Nature
November 1 – 30, 2014
BOA Gallery, West Hollywood Los Angeles, CA.