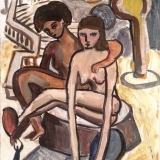 Alpha60 Projects, London. 'Some Guys are Thinkers and Some Guys are Doers' (with Hannah Hood), September 2013