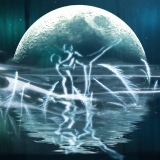 I am a bright creative artist and director with twenty years of animation and effects experience. I love to make fascinating motion graphics and visual effects across a broad spectrum of visual media for broadcast, web, events, film and commercials. I founded and ran my own award winning company for nine years where I learnt about management of great talent and supervision of CGI projects. There and previously during my ten years in Soho we worked on many big brands, TV shows and cutting edge holographic events. Always involved with projects in a hands on fashion I work with all the studio tools available and I am equally capable working with 2d, 3d and compositing softwares. I thrive on the challenge to design, solve and create any idea that can be imagined. My passion is to make inspiring visuals and put them on screen.

I have been making computer graphics and digital effects sequences since 1993. Having spent eleven years working in Soho at the heart of the UK post production industry, I then founded the design and animation house SquareZero in Sept 2003 and was a director and partner there until summer 2013. SquareZero collaborated as the creative partner with Musion systems the technology company who made 3d stage illusion events. We pioneered the best film making techniques for this amazing illusion, making over fifty film events including ones for the London Design museum and also museums in Stockholm, Russia and Ireland.

since quitting SquareZero in 2013 I have been making personal work, involved in collaborative art installations and working in a freelance capacity on creative and interesting projects
__

Senior animator and compositor. Responsible for most 2D projects, compositing and creative artwork in range of television broadcast, cable and commercial titles and effects sequences.

Head of animation. Responsible for overseeing production of animators and compositors, quality control and planning at all stages of pipeline. Managing and hiring creative staff, organizing division of labour, implementing resources to the best possible use.

My role encompassed acting as company consultant on all techniques and possibilities of post production from planning, budgeting, visual effects supervision, to technical specifications.

I also continued working on projects either as a designer or doing hands on animation or compositing work.